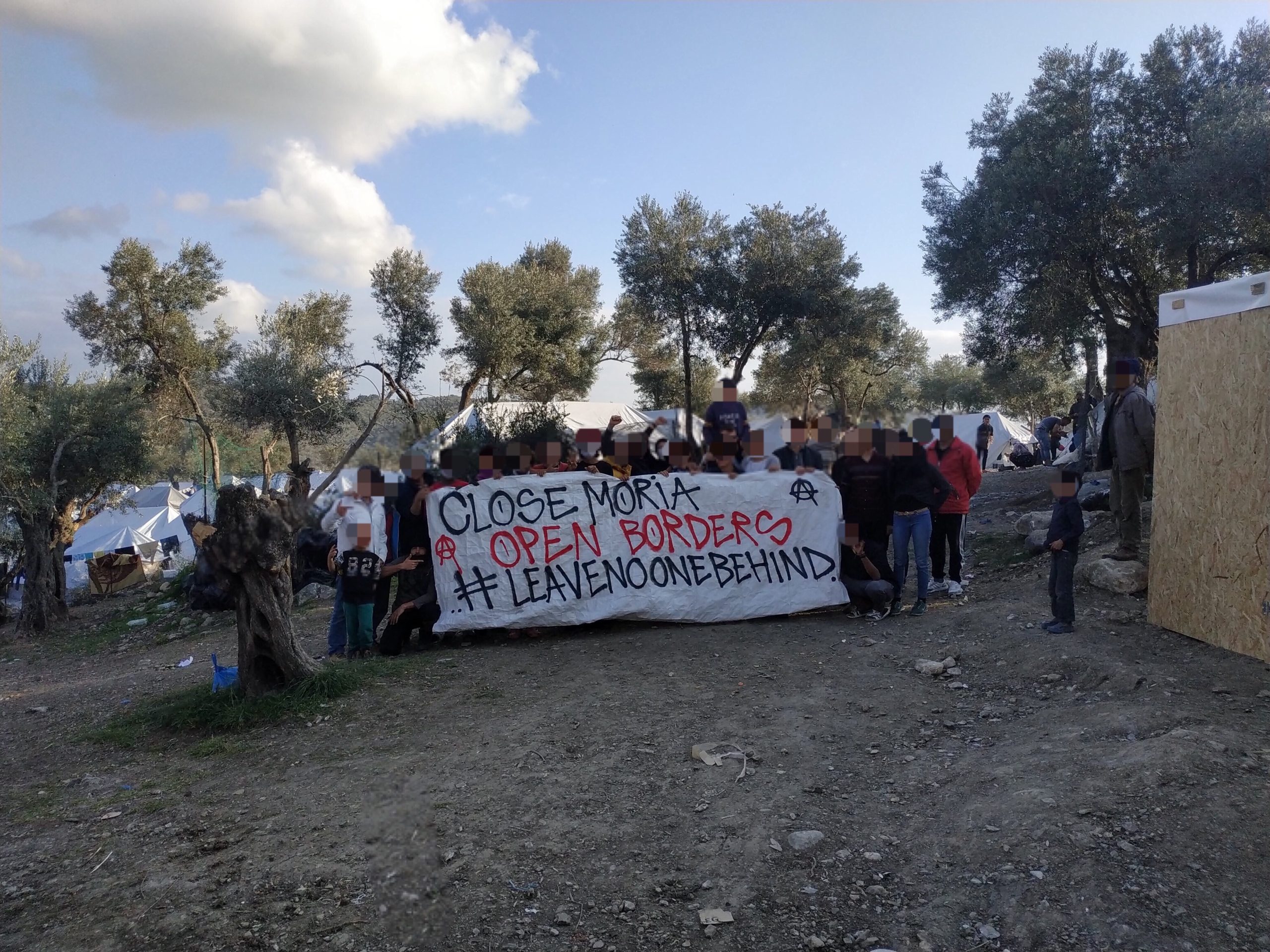 Currently our thoughts are preoccupied by two political themes that are constantly present in the news, Corvid -19 and the border politics of europe. In these confusing times these are giving us an ever present insecure and exeptional feeling. Social media is being overwhelmed with new hashtags, first and foremost #stayhome and #washyourfuckinghands. The absurdity is, how do people on the move, especially in a place like Moria, stay at home or wash their hands? We are two independent activists that have been regurlarly travelling to the Island of Lesvos for aproximatly two and a half years to support the migrant struggle. As members of the No Nation Trucks collective we where active on multiple European borders. With this article we want to bring together multiple aspects: the effects of the Corona crisis and the social relations on Lesvos. And by bringing these together illustrate the global move to the right of the political spectrum.

Moria, the lockdown prison on Lesvos and at the same time the biggest refugee camp in Europe. Former military base, that is used since 2015 as facility to house migrants on the Island. The  facilities are meant for 2.800 people. In april of 2020 there are aproximatly 24.000 people of whom 40% are children. The degradring circumstanes regarding the medical and sanitary situation has made numerous headlines in the past years. Corona has dramatically increased the tensions and threatens the camp with a humantiarian disaster for wich no one seems prepared. Running water is available in the camp for around five hours a day. This means that washing your hands all day long is not an option. 1300 People share one sink. There are long lines at the showers, toilets and for food. To keep the one and a half meter distance guidelines during these moments is not possible. 250 People share one toilet. When you see the images it is clear that the toilets are constantly filthy and are rarely being cleaned. The tents and huts that people live are wall to wall. In most cases there are only small inroads to the tents. Here the prescribed social distancing is defacto not an option. There is no water drainage system, and bacteria procreate in the tent flaps. Spreading of disease is inevitable under these circumstances.

/ EUROPE IS WATCHING INSTEAD OF HELPING

Behind these grievances is a system. Refugees must be deterred from coming to Europe or to continue their journey into Europe from Lesvos. These last weeks we have been working on constructing the Corona station in Moria. This includeds 20 houses, where 4 sick people can be isolated per house. —-But 20 houses for 80 people are a drop in the ocean in a camp of 24.000. It seems like a mockery to claim something is being done against Corona in this camp. In the whole of Europe it is possible to facilite toilets, showers and running water at big events for thousands of people. For example, at Rock am Ring 87.000 attendees have access to these facilities. These are numbers that are much larger then those in Moria.

After more and more messages reached us of the violence perpurtrated against migrants, volunteers, and supporting structures, we decided to come to Lesvos. Rocks being thrown at oncoming boats, checkpointsoccupied by fascists and the burning of the School of Freedom, located in the building of OHF. This situation has calmed down a bit, probably because of the limits placed on movement that are in place since march twenty third. Here we have a very interesting difference with Germany. Since the beginning of the corona crisis no other theme has been prevelant. If we take into account the facist attacks in Hanau and Halle or the facist attacks on Lesvos, we notice that these event seems to be forgtten very fast. We also notice that in the last months in Germany there is more discussion about the motiviations of the people that commmited these attacks in Halle and Hanau. In the current situation we better hope that this doesn’t have any consequenses further south. We have already seen the results of this fusion on this Island. The above mentioned deeds have been claimed by the ultra-right and nationalists. These actions are validated by international fascists and are targeted directly at refugees and their supporters. This proves the increased scale of the networking between europeans who share these ideas. Also they are able to capitalise on the international potential and claim the socio-political space for themselves. Members of the German and French identitarian movements traveled to the supposed open borders in the Evros region of Turkey and the connected unrest, or traveled to the Island of Lesvos. The local antifa reacted fast to let the self proclaimed “protectors of europe” know that they are not welcome on Lesvos. Already since the last EU parliamentary elections, it is clear that the the right in Europe are organised across borders. The coming together of the right on Levos is not arranged by the EU parliament or any specific party. The shared image of the migrant as enemy and their nationalist tendencies connects fascists of all nations. Through the agitations in Greece they reached a new level in the global pull to the right.

/ NOW IT IS IMPORTANT TO ACT ON THE ISLANDS

All these thoughts and impressions brings us as a collective closer together with our comrades. We, as part of the No Nation Truck, feel even more responsible in view of the situation. We have not forgotten that the Greek Islands are only the first station for people on the way to Europe. Overflowing camps means that also on the balkan route there will be more people tryig to make their way up. In 2019 we met two friends in Bosnia that we met only a couple of months before on Lesvos. They managed to get to the mainland and travelled further on the balkan route. Therefore this will be the future focus of No Nation Truck.