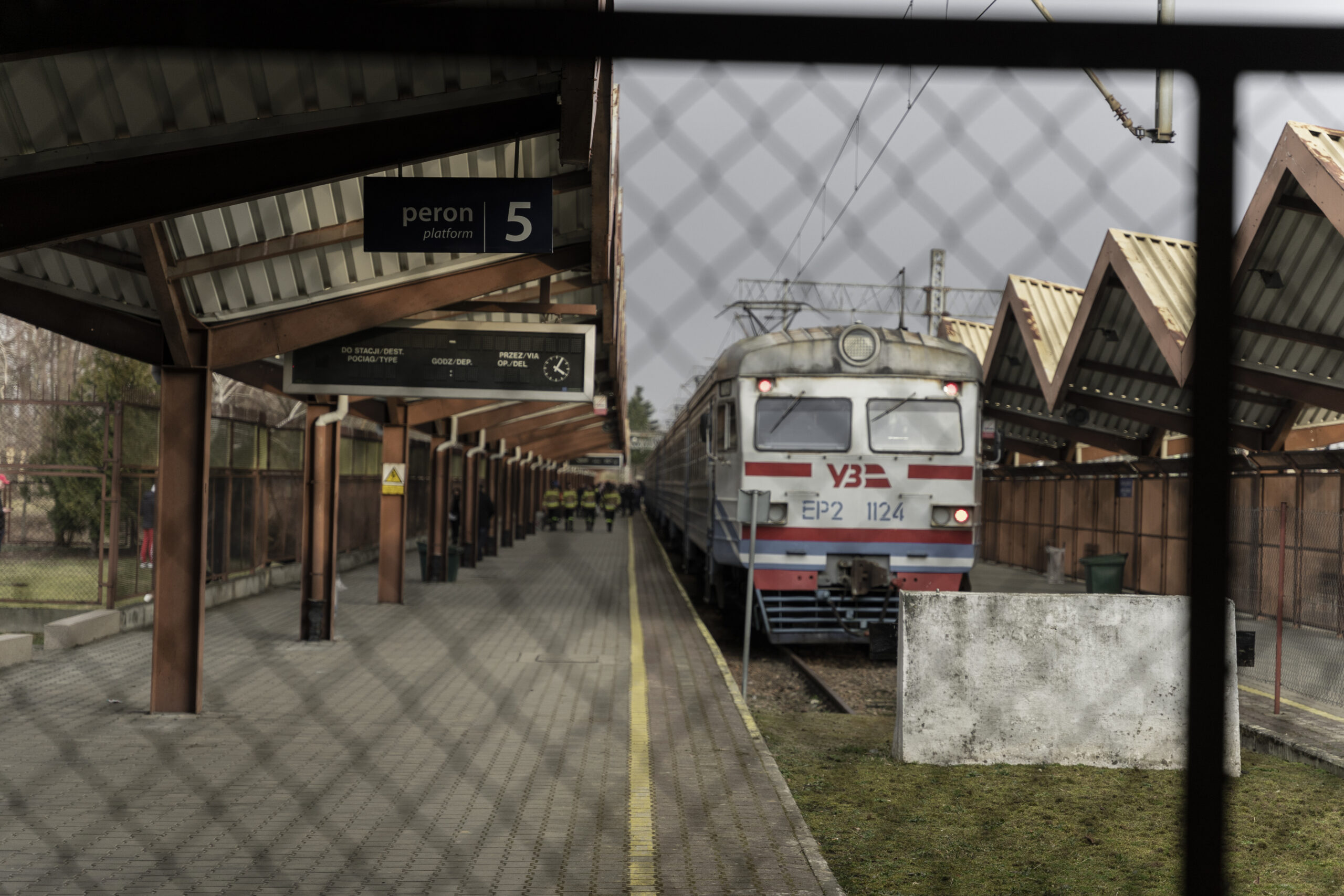 After the situation in Ukraine finally escalated on February 24, we as the No Nation Truck collective decided to take action. The truck itself is currently on its way to Greece with the ROSA collective, so we have allied ourselves with another collective: The Solibus. Together we drove overnight on Friday, February 25 to the Ukrainian border in Przemyśl, Poland. Trains from Lviv arrive here, but the Medyka border crossing is also not far, where people on foot and in cars wait to be let through drop by drop.

A bus station has developed in a parking lot on the outskirts of the small town. Dozens of people, mostly Pol:innen, hold signs in the air offering rides. Those who are not picked up by friends or family come here to continue their journey. Many have stood for up to a day in the cold outside the border, others have waited for hours in the dark on a crowded train during a bombing raid. Many have a cold, are overtired, have neither money nor cell phone network.

It was noticeable that hardly any people wanted to go directly to Germany, but mainly further to countries like France, Belgium or the Netherlands, where they have relatives. Many people with Ukrainian passports wanted to stay in Poland and were looking for rides to the nearest big cities. We noticed that especially Black people and People of Color were stranded here and didn’t know where to go: International students, people with asylum status, people with international work visas. Reports piled up that these people had already had a particularly hard time getting through at the borders. Many of these people wanted to continue on to Western Europe, to relatives or acquaintances – very few had contacts in Poland.

Barely four hours later, the Solibus with 48 passengers set off again for Germany. Among them was a mother with a child, whose husband had driven them to the border but remained in the country himself. In the meantime, men between the ages of 18 and 60 who are fit for military service are forbidden to leave the country. A family from Mali who fled war in the north of the country and sought asylum in Ukraine. Two students from Algeria who had spent a semester abroad in Kyiv. Two men from Afghanistan who had recently fled the Taliban. A woman from the Berlin area who was in Kyiv for a conference. All of these 48 stories are individual, yet they have one thing in common: they are all looking for a safe place to stay. At four o’clock in the morning on Sunday, February 26, we arrived at the ZOB in Berlin, where a team of the No Nation Truck took care of the travelers and organized the rest of the journey.

The same bus with which we were traveling here was turned away at the Polish-Belarusian border just a few months ago and had to drive back empty while people froze to death as a political pawn at the gates of the EU. The solidarity with the refugees of Ukraine is important and right – but it also shows where the priorities of a majority white and Christian society lie when it comes to compassion for refugees. As of this writing, the German and Polish railroads are also only talking about free rides for Ukrainian citizens. At the border it is more difficult to let them through, at some border points not at all. Of all people, those who are often seeking protection for the second time, fleeing from war or who have been displaced before, have a particularly hard time.

There have also been situations at train stations where people of color have been pushed off trains or prevented from boarding by force. At some borders there are separate queues for Europeans and non-Europeans. Also in the public reporting formulations and narratives circulate which are so openly racist that we do not even want to repeat them. This unequal treatment is unbearable and cannot be justified by anything.

Even still in the face of war and violence, Europe shows their disgusting racism.

We demand that ALL people on the run are treated equally in solidarity and will continue to work for ALL to get to where they want to live in safety and peace!