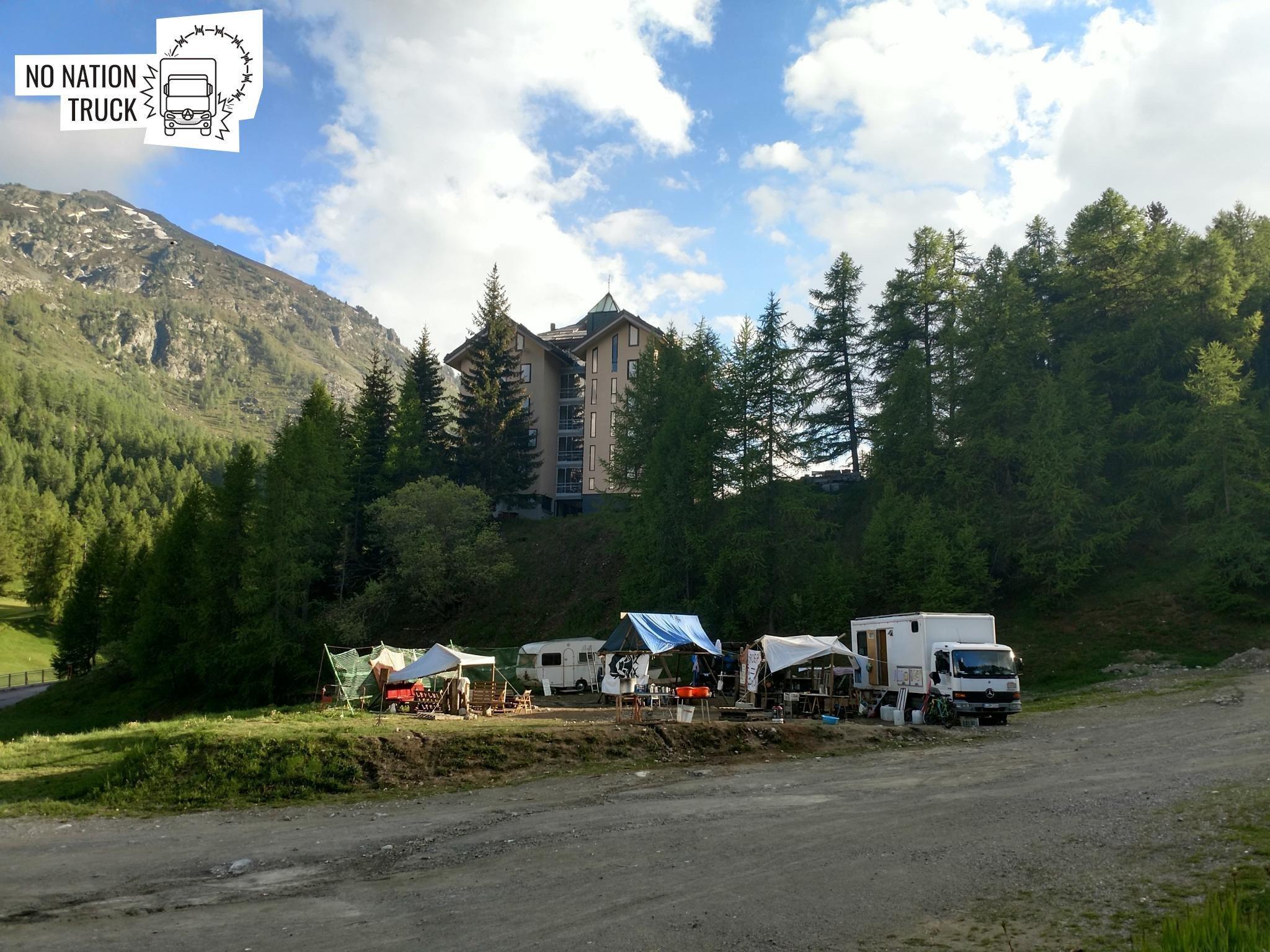 The border camp in Claviere, of which the No Nation Truck is a part, has been resisting for almost three months! The border and its deadly dynamics continue to change, and from here we continue to observe the violence that states use against those who want to cross the border and those who are determined to resist and act against it.

At the border, as well as in the CPRs (detention centers) and prisons, the violence of the state is palpable thanks to the operational arm provided by the humanitarian organizations in consultation with the prefecture and in direct collaboration with the police. The Red Cross goes to Claviere every evening to receive the bus coming from Oulx. The employees are often absent after 10 p.m., even though their supposed mission is to provide medical care to people crossing the mountains or injured while fleeing from the gendarmerie, PAF (Police Aux Frontiéres – French border police) and military.In fact, the Red Cross participates in push-backs in agreement with the Italian and French police. In many cases, the ambulance itself is responsible for transporting people turned away by the PAF to the shelter in Oulx. For months, Red Cross operators have been distributing a leaflet warning people not to put themselves in danger given the risks in the mountains. We know that mountains can be dangerous, especially if you hike at night, in the cold and without local knowledge. But it is the presence of the police that makes them deadly. Borders kill, both in the Mediterranean and in Ventimiglia and in these mountains, where four people have died in recent years and countless others have been victims of theft, beatings and assaults. Also in these last weeks we saw people who suffered injuries and wounds when they fled from the police in order to escape their control and violence. Likewise, a pregnant woman suffered a miscarriage after crossing the border on foot at night.

Repression has also increased against us: Every day we are under observation. They want to intimidate and threaten us because our presence is unpleasant, especially with the arrival of the summer season and tourism.

From the reports of people who have been pushed back, we know that the Italian police are more and more involved in pushbacks. We were told that a few days ago the Italian police entered the Talitha Kum shelter in Oulx to take the fingerprints of four people who had previously been pushed back.A few days ago, it was also announced that the prefecture was providing 180,000 euros to the shelter.

In recent weeks, the Italian police came to the French border police station (PAF) to take on the spot the fingerprints of people arrested during the night. Such collaborations between Italian and French police are not a surprise, but a clear example of how Fortress Europe violently enforces its racist and oppressive policies to manage and control the lives of undocumented people and to protect its internal and external borders. It is now common practice that people who have been pushed back are given a piece of paper that obliges them to report to the Turin police station. The piece of paper, the umpteenth intimidation, represents a coercive attempt to integrate people on the move into the system of a state in which they obviously do not want to stay.

Against states, borders and all their accomplices we should organize and act. The resistant, cross-border camp continues, join us!